The education of learners with hearing impairments in Mbingo started as a pre-school training unit in 1995 and later in 2000, it was officially registered as a primary school with the name Cameroon Baptist Convention (CBC) Integrated School for the Deaf (ISFD) Mbingo. Then, the school aimed at meeting the educational needs of children with hearing impairments in the region and beyond who were out of school because mainstream schools at the time could not meet their learning needs. In 2017 ISFD, which is located in the premises of the Mbingo Baptist Hospital, Belo Sub-Division of the Northwest Region, was renamed CBC Inclusive School and Sign Language Centre (ISSLC) Mbingo, with additional objective to provide inclusive primary education as well as sign language training to resource teachers and members of the wider community.

According to Mr. Che Manaseh, former Head Teacher of the ISSLC, the school had the challenge of having insufficient structures to accommodate the growing population of learners, given that there was continued awareness, identification and referrals of learners with hearing impairment by teachers and the Community Based Rehabilitation Services. With the increased numbers, some pupils were attending classes in a makeshift tent by a carpentry workshop which was not conducive enough for them. The school also had insufficient equipment and materials for skilled teachers which could facilitate teaching and learning.

Within the framework of the Dordrecht-Bamenda Twinning, in which CBCHS is a partner and beneficiary of the Dordrecht-Bamenda Foundation, Mrs. Truus Treep and her friend Wil Schrijvershof of blessed memory, visited ISFD Mbingo in 2008. They were burdened by the challenges faced in educating hearing-impaired children in Cameroon. After her visit, Truus formed a solidarity committee to support ISFD.  Her target was to facilitate the education of children with hearing impairments by providing academic supplies, didactic materials as well as organizing capacity-building workshops for resource teachers.  To address the challenges of insufficient classroom space, Truus continued to mobilize funds directed to the construction of 4 classrooms that facilitated the transition of the school from a special needs school to an inclusive school in 2018. Thanks to Truus, the ISSLC today boasts of 4 additional classrooms, a girls’ dormitory, a school refectory, remodeled boys’ dormitory, mattresses with mosquito nets, and 10 bunk beds for the dormitories. Her support has also ensured the payment of school fees for some very poor children in the school and financial motivation to teachers for 3 years.

Mr. Che Manaseh says the intervention of Truus was very timely.  To him, the investments in the school have yielded positive impact as the pupils now receive quality education in spacious classrooms with adequate didactic materials and well-trained teachers. He adds that the construction of large classrooms adjacent to the CBC Primary School Mbingo I (formally a mainstream school) was merged with Former CBC ISFD and has greatly promoted the inclusion of pupils with hearing impairments in the school. 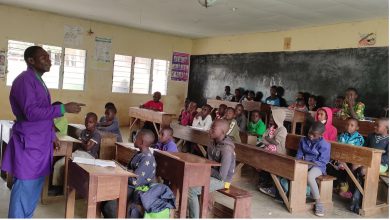 Despite these achievements, the school’s educational activities have been perturbed by the socio- political crises in the Northwest and Southwest Regions of Cameroon. In 2017, when the crisis just started, classes were suspended for some time because of security challenges, but later resumed with an enrollment of over 400 pupils.

With the current crisis, the school is working to promote e-learning for children with hearing impairments through the development of a Sign language Dictionary. Additionally, the school is promoting the training of sign language interpreters from institutions of higher education and the community, as well as the provision of early infant education opportunities for deaf children.

The school currently provides quality support in primary education to learners with hearing impairments, mobility impairments, and mild intellectual disabilities in mainstream settings. Plans to revamp the Poultry farm and vegetable garden located beside the school to sustain the running of the school and enhance livelihood for some pupils of the school are on the way (read article in Dutch about this project here).